1 in 6 people has literacy difficulties in Ireland 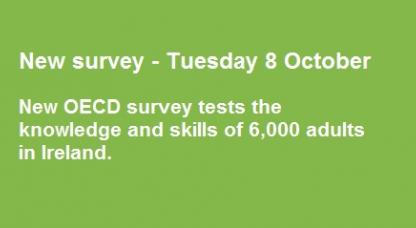 A new OECD survey shows that almost 18% or about 1 in 6, Irish adults are at or below level 1 on a five level literacy scale. Ireland ranks 15 out of 24 participating countries. At this level a person may be unable to understand basic written information.

25% of Irish adults score at or below level 1 for numeracy compared to just over 20% on average across participating countries.

The Irish results of the OECD survey were announced on Tuesday 8 October by the Department of Education and Skills.

For this survey the CSO interviewed 6,000 people aged 16 – 65 in Ireland and assessed their literacy, numeracy and ability to use technology to solve problems and accomplish tasks.

42% of Irish adults score at or below level 1 on using technology to solve problems and accomplish tasks. Six other countries score at similar levels. They include Finland 40%, Estonia 43% and Sweden 44%.

The OECD 2013 survey breaks new ground by collecting a broad range of information including how these skills are used at work and in the community.

“The results from the OECD adult skills survey show that 18% of Irish people have difficulty understanding basic written text. The number at or below level 1 in numeracy stands at over 25%, placing Ireland even further down the international rankings in 18th place. This survey confirms findings from other reports that people with the lowest skill levels also have low educational attainment, earn less income, are more likely to be unemployed and have poorer health”.

“Along with a mountain of data now available for further research, this survey challenges how we think about skills. It provides compelling evidence that mass participation in mainstream education is not sufficient to produce strong literacy and numeracy skills for life. The results show that at any one time people’s skills are influenced by factors such as skills used in work and day to day living. Skills are developed and maintained throughout life and are not learnt once during primary education.”

You can read the full Irish report here.