Calling all candidates – avoid political jargon and use plain English

With the general election set for Saturday 8 February, we will be hearing a lot more about fresh mandates, manifestos, swing voters, fiscal space, building an Ireland for all and a future to look forward to – but not before the Government is dissolved – just like an aspirin!

In response to all this jargon, we at the National Adult Literacy Agency (NALA) have a ‘Plain English Guide’ to the way politicians and political commentators speak.

It explains the well-worn phrases used in election campaigns that are often misunderstood, such as the hustings, tallyman and marginal seat.

“Politics is awash with terms and phrases that are beloved of commentators and politicians alike. That’s why we wrote this guide – to help people to better understand what is being said. But we also encourage political parties to use less jargon and to be more aware of the issues faced by the 1 in 6 adults with literacy difficulties in Ireland. While political jargon allows politicians to talk about issues in a quicker, coded way, it can also act as a real barrier for people accessing information,” said Dr Inez Bailey, NALA CEO.

Here is a selection of some of the phrases from NALA’s Plain English Guide to Political Terms.

Bandwagon effect: The tendency for a popular candidate or proposal to gather even more support simply because they appear to be winning; also called the “snowball effect”.

Canvassing: Trying to win votes by contacting voters directly, for example, by going door to door.

Mandate: The authority to represent people’s interests and take action on their behalf.

Quota: The number of votes that a candidate needs to win a seat under the proportional representation (PR) system.

Swing voter: A person who votes, but whose support can switch from one political party to another, depending on the issue at stake. 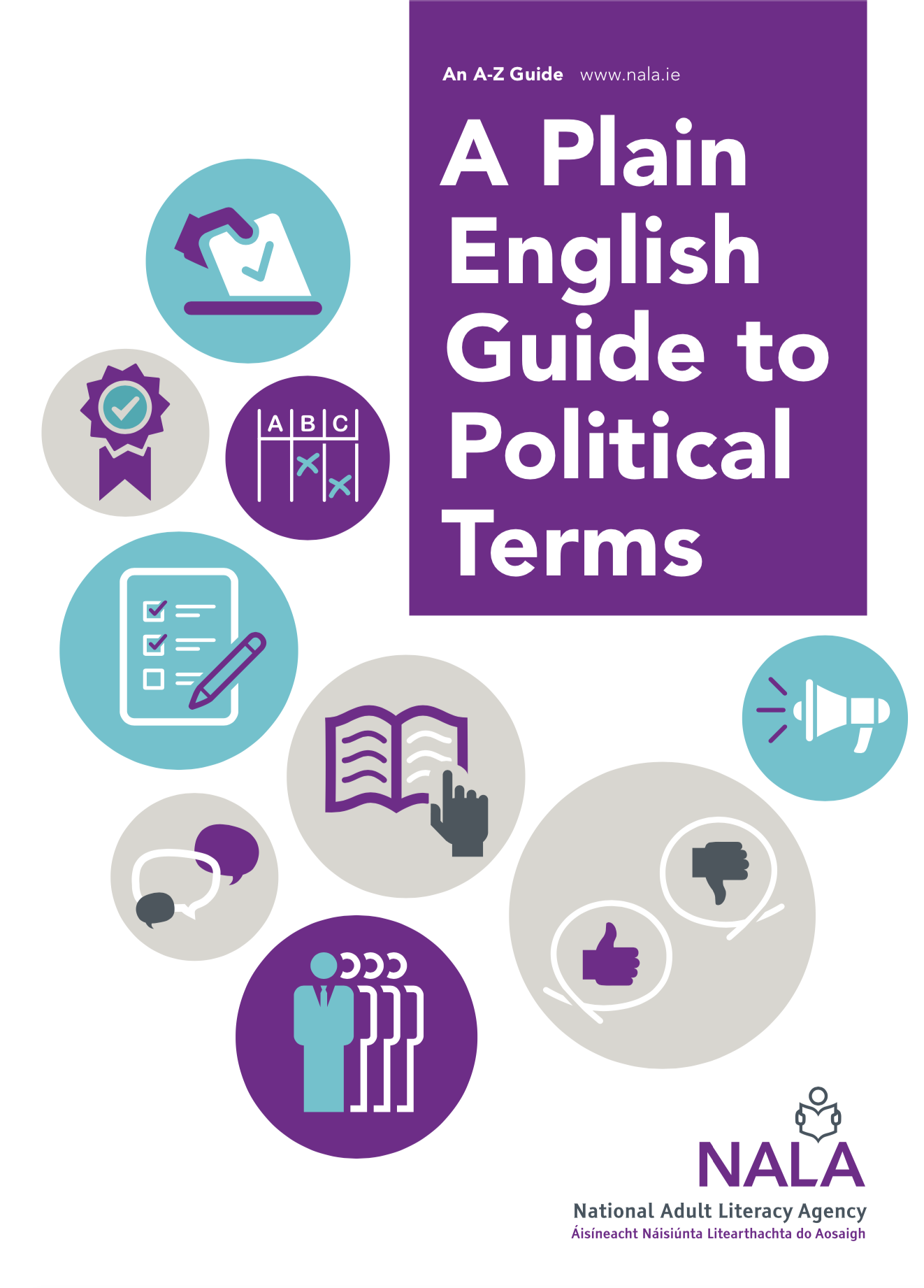 One in six voters has difficulty reading

This plain English guide focuses on political terms as part of NALA’s ongoing campaign on literacy and political participation.

The most recent OECD survey of 6,000 Irish people showed that one is six adults has difficulty reading and understanding information. This has devastating consequences for individuals, society and the economy. Many of these individuals are in work, in low skilled jobs and are unequipped to deal with technological changes in the labour market.

The National Adult Literacy Agency (NALA) is seeking the support of all political parties for greater action on adult basic education – literacy, numeracy and digital skills. Specifically we are seeking the following commitments in their manifestos:

Over the coming weeks we will be asking our members, stakeholders and the general public to vote for political parties that want to support those will low basic skills – to create a more equal society.

We are also offering support to all political parties to write the Executive Summary of their manifestos in plain English.

About the National Adult Literacy Agency

Want to brush up on your maths over the summer?