Literacy and numeracy difficulties in the Irish workplace: Impact on earnings and training expenditures 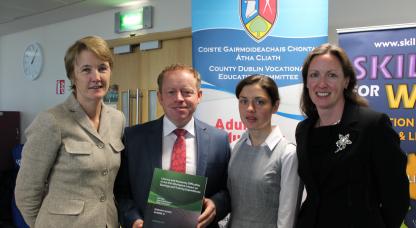 On Monday 24 September 2012, at the start of National Adult Literacy Awareness Week, Mr Ciaran Cannon, T.D., Minister of State for Training and Skills, launched a comprehensive study investigating the experiences of people with literacy and numeracy difficulties in the workplace. In particular, the study examines the impact that such skill gaps have on employee’s earnings, along with their effect on firms’ training expenditures.

Extensive research in other countries illustrates the importance of basic literacy and numeracy skills for an individual’s earnings. However, very little is known in Ireland about the impact that such skill gaps have on peoples’ earnings, or on the effect that literacy and numeracy difficulties might have on private sector firms’ training expenditures. This study utilised data from the Central Statistic Office’s National Employment Survey October 2006 to assess these two issues.

The main findings of the study are:

1. In 2006, 1.5 per cent of employees indicated that they had a literacy difficulty, while 2 per cent reported a numeracy difficulty. The rates for both skill gaps were slightly higher among males than females.

2. The proportion reporting literacy difficulties rose to more than 6 per cent for those whose highest educational qualification is a Junior Certificate, and almost 9 per cent of this group reported numeracy difficulties.

3. Overall, literacy difficulties were found to reduce an individual’s earnings by 5 per cent. The wage penalty associated with such difficulties was greater for females than for males.

4. On average, no wage penalty was found for numeracy difficulties. However, a small negative wage effect was identified for those who worked full-time, and also amongst those in the lowest income group.

2. Those employed in the transport sector recorded the highest rate of literacy skill gaps, while workers in the wholesale and retail, transport and other services sectors reported the highest incidence of numeracy difficulties.

3. The negative wage effect associated with literacy difficulties is confined to the private sector and in particular amongst those working full-time; in this case the negative impact was just over 8 per cent.

1. Just over 1 per cent of private sector firms experienced significant literacy skill gaps among their staff, with the corresponding figure for numeracy skill gaps stood at almost 2.5 per cent.

2. The incidence of literacy and numeracy skill gaps were substantially higher in the transport sector and lower in the financial sector.

3. The study found that most employers who had staff with literacy and/or numeracy difficulties did not invest in training to address these skills gaps. Instead, employers were more likely to respond to skill gaps in the areas of management or foreign languages.

Inez Bailey continued “People with literacy and numeracy issues often hide their problem especially in the workplace where they fear ridicule or worse. However, free programmes to support people improve their literacy and numeracy skills exist both in the workplace and the community. Improving these skills benefits the individual in terms of increased earnings. This is an important motivational message to get into workplaces all over Ireland. In addition, it is clear that continued Government support for the Workplace Basic Education Fund is critical in order to increase literacy and numeracy skills amongst employees so that they can develop in their career and increase their earning potential.”

Welcoming the report Minister Cannon said: “I am delighted to launch this ESRI/NALA research report which examines the extent of reported literacy and numeracy needs among employees in Ireland and how they impact on earnings, amongst other things.” The Minister continued “research – including this research – points to how people can improve their earnings by improving their basic skills. I think this report shows how upskilling those at work can be of value to our society and our economy. ” The Minister concluded “ this report is salutary because it shows how powerful good data, good data collection and good data analysis can help us in making better policy decisions. This is something which I place a great deal of importance on and especially in the context of the impending establishment of SOLAS. ”